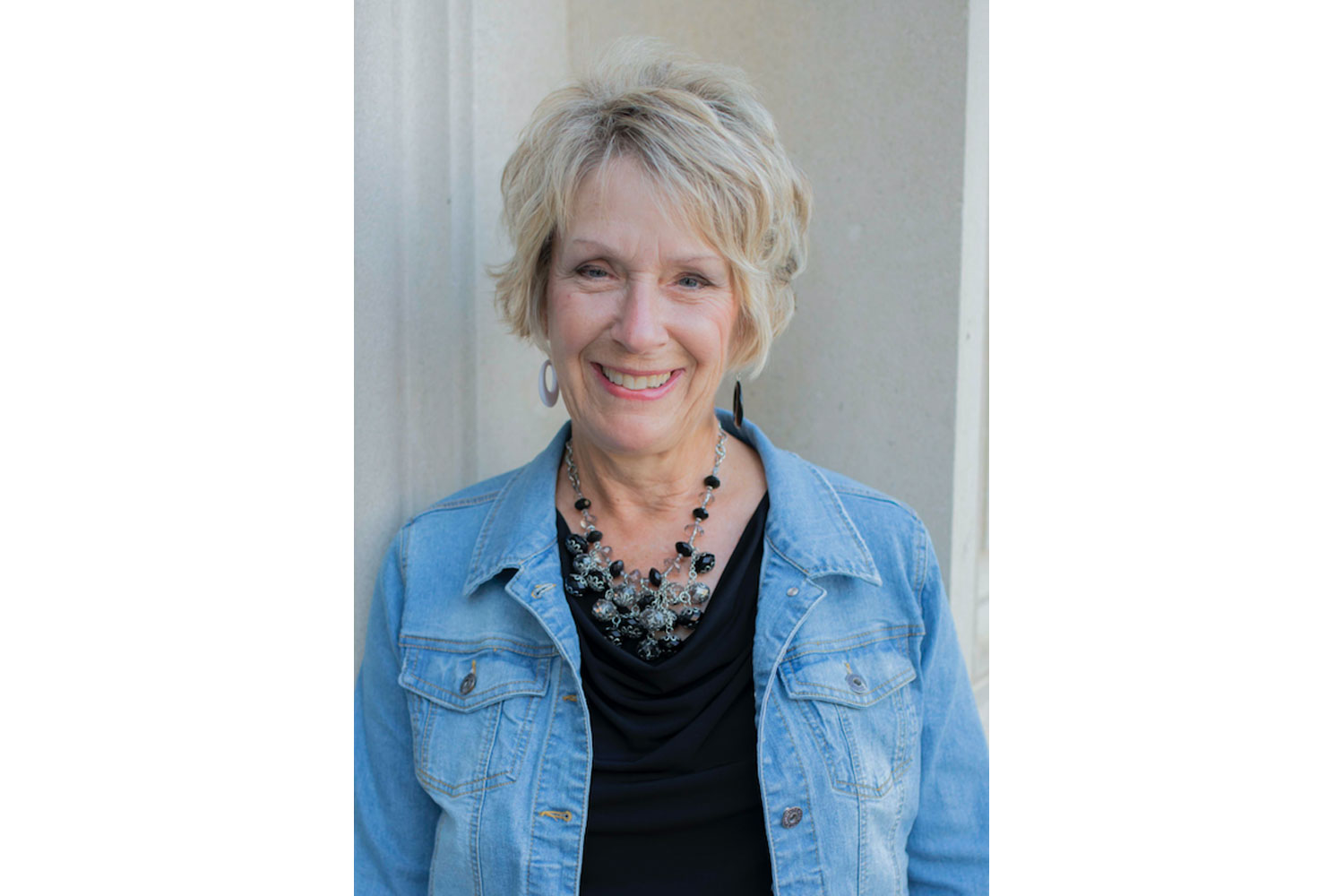 Michelle Weidenbenner grew up with five brothers. In fact, she used to cry whenever her mother would bring home a new baby because she desperately wanted a sister. However, the experience of growing up surrounded by boys helped Michelle build a mental toughness and a backbone for many of the challenges she has faced in life.

For many years, Michelle made draperies and dabbled in interior design while her husband, Dave, traveled extensively for work. The couple had two biological children, a girl and boy, but she felt called to adopt another child.

They adopted a girl from Russia who was developmentally delayed and required a bit more attention. Olivia was also more than 11 years younger than her older brother and sister, so Michelle became a stay-at-home mom.

“Olivia was such a gift for us,” she explained. “She was always tiny. So either God created her that way or Olivia was slower to develop because she lived in an orphanage for two years before we adopted her.”

Closing in on 50 and still raising a young child, Michelle took up writing to keep her mind sharp. She took writing courses and attended conferences to meet other writers.

When Michelle was nearly 60, she and her husband became guardians of their two elementary-age granddaughters when their parents became homeless as addiction took a tremendous toll on their lives. Michelle’s son and daughter-in-law advanced from drinking to opioids to heroin and finally to methamphetamines. They became emaciated and Michelle thought they would die.

Once the couple reached rock bottom, they started a slow climb to recovery. Today the couple is three years sober and the entire family has been reunited.

“Four years ago, if someone told me this would happen, I would have told them they’re crazy,” said Michelle. “But, I witnessed it first-hand. I know if they can turn their lives around with proper support, then so can other people. It’s a battle many people face every day.”

Michelle’s effort to learn effective writing and establish connections paid off because she has published nine books. Many of them were different genres, which is unusual for authors, but demonstrates the wide range of her writing capability.

“For me it was always about the message, not so much the writing itself,” Michelle explained.

For example, one of her books was a novel that delved into reactive attachment disorder, a problem common among children who spent time in institutions. She also wrote a series of children’s books to help them develop coping mechanisms for dealing with serious problems, like an alcoholic parent.

“I have always been a fan of Disney-type family movies. Except for an adult-oriented geocaching thriller I wrote, I really like to write those kinds of inspirational stories,” said Michelle.

Deeply addicted to a variety of substances, Michelle’s son and daughter-in-law would rally to overcome one problem, then fall into trouble again. It was hard for the girls who desperately wanted to resume normal lives.

Knowing that thousands of girls experience the same frustrations, Michelle wrote the books to give other children hope and inspiration for a better life.

“I had to contend with a wide range of emotions myself,” she explained. “I’d be angry one day and grieving for my granddaughters’ lost dreams the next.

“When I started researching addition, I realized it truly was a family problem.” she added. “The antidote for addiction is not isolation, detachment and removing yourself from an addicted person or those people. Healing comes from connecting and finding a way to remain connected.”

Michelle’s first non-fiction book was written to help mothers who were trying to help their loved ones overcome addiction. She founded the All Mighty Moms tribe and launched the Moms Letting Go Facebook group to create a support community for people who had read the book. Her podcast offers advice from people who’ve already lived through a family addiction problem.

“Every day, my tribe kept me going. When I thought I was alone, I quickly understood that everyone in that group knew and understood exactly what I was feeling,” she explained. “It was a profound realization for me that people actually heal in communities with others who have experienced the same problem or who are walking through it at the moment.”

Next, Michelle created an accountability program for mothers. Through Bible studies, coaching and weekly support calls, participants work to encourage one another. They even collaborated to write a book that will be released around Mother’s Day 2022.

Called “Unhackable Moms of Addicted Loved Ones: Closing the Gap Between Havoc and Hope,” it is cobranded with Kary Oberbrunner’s book, Unhackable, which is a New York Times and Wall Street Journal bestseller.

“My book is specifically written for moms of addicted loved ones who want to heal from the shame, blame and chaos, so they are in a better position to help their children and others,” said Michelle. “It’s a 30-day program which takes readers through a healing process. There will be a self-help course moms can take, and they’ll have the option to become a certified coach and implement this program in their own communities.

“This is the No. 1 thing that just lights my soul on fire. My goal is to empower a million moms of addicted loved ones to get into recovery by 2025,” she added. “I know I can’t fight the problem by myself. But with a million mama bears joining me, we can really help transform recovery options, jails and prisons, and our families.”

Reaching the goal will require shaping a landscape of different resources and communicating with others to bridge the gap with hurting people.

Michelle also plans to write a screenplay in 2022, and she’s working with coaches to help develop the plot and visualizations essential to making it an inspirational movie for people to watch.

“I may have created this environment, but I’m the one who’s learning so much from these amazing people,” said Michelle.

When Michelle’s biological children were younger, she wanted to have a larger family. So, she and Dave embraced foster parenting. They took special classes before a 5-week-old boy was placed with them. He was eventually adopted by a wonderful family.

The foster parent training helped Michelle and Dave serve their granddaughters during their difficult separation.

The training also helped Michelle learn to help parents better communicate with their own children and grandchildren contending with someone in addiction.

“Even when people are in the throes of addiction, we always seek a way to collaborate and help them be motivated to change,” she explained. “We can’t make an addicted person change if he or she doesn’t desire it, but we can help their loved ones to cope with changes they experience themselves.”

Michelle joined a mastermind group in 2021 just to surround herself with people of passion and purpose. They opened her eyes to turning her pain into profit, not only to pay for expenses, but to give Michelle money to build a bigger platform.

“I was convinced I could never ask anyone for money,” she explained. “But the mastermind group showed me it will take money to actually solve the problem. I realized I could make money and reinvest it into places that improve mental health awareness and help people overcome addictions.

“Like everyone else, I had blind spots in my own life and way of thinking,” she added. “When you’re in a mastermind group with other truth-tellers, you find out where you can and need to grow.”

When Michelle and Dave first had to contend with their son’s addiction, they were convinced he was just making poor decisions. They later learned addiction is an illness requiring treatment before someone can confront the problem. Once addicted people get treatment for the illness, then they can begin working their way out of a hole they dug, she said.

Michelle’s son and daughter-in-law have worked their way from the brink of death to a point where their pain is contributing to a purpose to help others through similar experiences.

“Today, they are so open about everything that happened to them. So when I am working with a homeless mom who has a child, I can ask my son and daughter-in-law for advice on what to say or do,” said Michelle. “Sometimes the parents or children of addicted people will come on support calls to help mothers understand where their children are coming from.”

When Michelle was 58, she became a John Maxwell certified coach and speaker. That helped improve her presentation skills and gave her access to a plethora of self-help material she could share with others.

When Michelle started leading support meetings on Zoom, even before COVID made it essential, she was very nervous about using the technology. However, her oldest daughter helped her practice conducting meetings and efficiently using the platform.

When she wanted to start a membership site, again Michelle’s self-limiting beliefs convinced her it was beyond her capability. But, her mastermind group helped her realize not only could she form a membership group, but she could thrive by doing so.

“It’s often the fear of doing something new that holds people back,” she explained. “You might ask yourself, ‘Am I good enough?’ But when I realized it wasn’t about me and that other people needed the information and services I offered, then everything changed.

“Because I knew moms needed me, I was able to push my ego out of the way,” said Michelle. “I was able to lose my embarrassment and thinking I wasn’t enough. I just focused on that one person who needed to hear what I had to say, and it made starting something new much easier.”

Occasionally, Michelle will get a note from someone who was helped by a book she wrote or a group she led. She keeps them all in a special file so that if she ever begins to question whether she’s having any impact at all, there is a file of supportive endorsements she can read to renew her purpose.

“If I had to do this all over again, I would have started much sooner than I did,” said Michelle. “At the time, that was probably all the energy I had available to share with others. Today, I know there are 1 million moms who need empowerment and what I have to offer. This is something I will do until the day I die.”

To connect with Michelle, visit www.michelleweidenbenner.com.

All of Michelle’s books are available on Amazon.com.