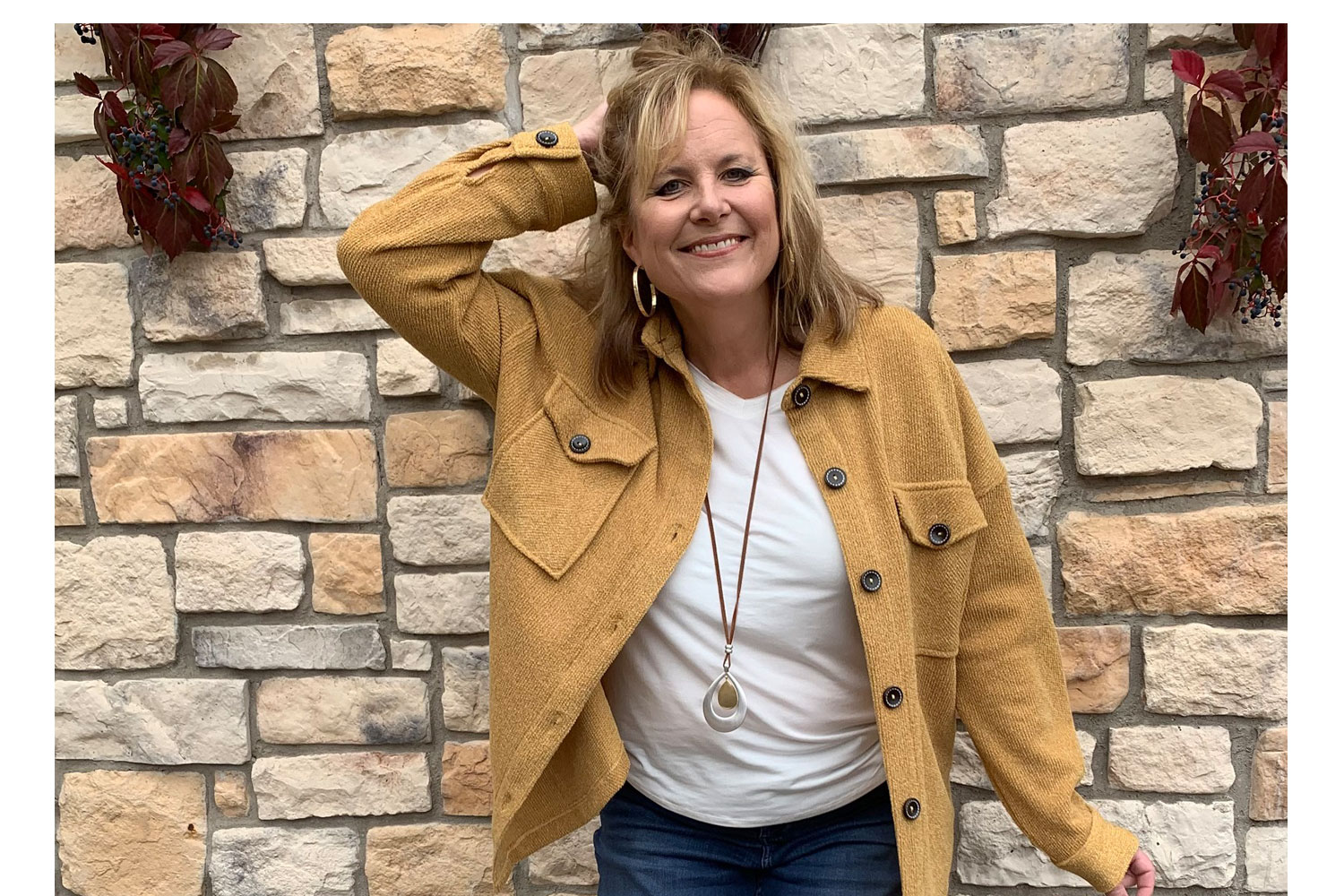 Kari Clark is a 56-year-old Minnesota native who lives in Stillwater. She has a bachelor’s degree in social work and a master’s degree in therapeutic recreation with a background in sales, advertising, marketing and human services.

But, she had two things holding her back from pursuing her lifelong dreams: fear and co-dependency which has caused her to choose unhealthy and emotionally abusive relationships. She has since left her unhealthy relationship and has spent a great deal of time healing and growing.

“I love to share what I’ve learned in my life and to help others to grow,” she said. “I also love things that inspire me and hope to inspire others with my vulnerability.”

One activity Kari enjoys is reading other people’s memoirs to understand life from the author’s perspective as well as lessons they learned while living it. She, herself, has hundreds of stories fully developed in her mind. A relative wrote the script to Grumpy Old Men, which was his first screenplay.

“When I met him and asked how he came up with the story idea, he explained that it had always been in his mind and he just finally wrote it down,” she explained. “That’s how it works for me too!”

Kari likes to teach others whatever she, herself, is learning. She has taught many classes and is currently creating a Zoom course.

Dealing with dysfunction and abuse

The first book she’s publishing next year deals with dysfunctional families where emotional and verbal abuse are the norm called Why Smart Women Stay and How They Can Leave Once and for All.

“I used to be drawn to men who had undealt with problems because, in my heart, I thought I could help them,” Kari explained. ” It started in my family of origin and it was like a compulsion to try and find someone that could actually heal.

“There are a lot of women, like me, who are in unhealthy relationships, but have difficulty leaving,” she added. “I left six times before I was completely ready to move on, which happens to be the average number of times women try to leave before they are successful.”

Kari stayed in that relationship for five years. Her partner, who worked in human services, had been severely abused as a child himself, and was afraid to do the work he needed to do to heal. She doesn’t know if he’ll ever recover from the abuse he endured. However, Kari knew she had to take steps to recover her heart and soul.

“I finally got to the point where I loved myself enough that I needed to heal and move on,” she explained. “That’s why I was put here on earth and was subject to being mistreated by others. It was to prepare me to share my story in hopes of helping other people escape similar relationships.”

When Kari tells other women what she is writing about, a great percentage of them admit to struggling with similar problems. Many times, their biggest fear is financial. That’s something she can relate to very well.

“When I was a teenager, my parents divorced and we went from having plenty of money to suddenly having very little,” she explained. “It felt like the rug had been pulled out from underneath me. Yet, I kept repeating that same pattern throughout my life – never being able to make much money without having to sell my soul.”

“I was trapped in a self-fulfilling prophecy of not having enough money, not feeling I could trust myself with it, and then watching it go away,” she added. “Now that I am a business owner and know exactly what I can do to make more than enough money to cover my expenses. Most importantly, I finally love myself enough to enjoy a more financially-secure life. I look forward to helping others do the same.”

Standing up for herself

Kari’s recent experience at her last job involved working in a poorly-managed hotel with a dysfunctional staff. Things were dirty and broken. The staff was burnt out and used a lot of manipulation tactics with one another. The other sales person was threatened and gave the owner an ultimatum to choose between Kari or her. So, despite the general manager’s strong recommendations against it, the owner fired Kari.

“Even though I understood that the people I was working with had low self-esteem and unresolved personal pain, I still felt like I had been hit by a train from behind and slapped in the face,” she added. “I was so angry that I was literally shaking. I went home and cried for hours before taking my dog on a power walk to release all the adrenaline stored in my body.”

Most workplaces are dysfunctional to some degree, but employees often put up with people at work they would never tolerate in their personal lives. Again, fear is often the biggest magnet keeping people stuck in bad situations.

“I now realize that, because I had worked on myself for years to be happy and had gone into work each day with a positive attitude and a smile, that my soul was shining in that dark environment and it threatened people who felt stuck in a very difficult place.”

Interestingly enough, Kari realized the same day she was fired that it was a real blessing in disguise because it opened the door for her to pursue something she wanted to do for many years — be totally self-employed.

“I also felt that God was saying to me, ‘No, I don’t want you to be in dysfunctional relationships period – whether in personal relationships or at work.’ I also realized He knew I was ready to make enough money to support myself on my own,” she explained. “I needed a kick down the road, and when I wouldn’t do it on my own, God closed the door.”

After Kari created a vulnerable post about her situation on Facebook, she received many friend requests from other people, and she started building a business. She has found a flexible full time training job in which she can reduce her hours whenever the business is strong enough to fully support her financially.

In the meantime, Kari has created her own website, karilclark.com and will be offering a Zoom course based on her book material.

“It’s almost like having beta readers before my book is even written,” she said.

Kari also offers empowerment life coaching. She has started her own business Facebook page at Kari L Clark and even has a private group called Why Smart Women Stay and How They Can Leave Once and For All.

“It feels a little scary to be starting a business because of everything it takes to make it successful. It’s a big commitment to consistently take the steps necessary to advance any business. But, I am more confident than I ever have been that I have what it takes to be successful.”

“I really can’t explain it, but I know I am here because I have a voice and a message to share,” she explained. “What matters most is taking the time to get that message out to the world, and when I focus on that, my fear melts away.”

She is confident that as she moves in alignment with her specific purpose, her path will change and doors will open to move her exactly where she needs to be to connect with the right people at the right time. But, it required Kari to take that first step in faith and “walk on coals” to get there.

“That first step is always the scariest,” she said. “But complete joy awaits at the end of the path. One thing I have learned is that productivity brings me happiness.”

However, owning a business requires structure and discipline in order to accomplish anything, and that’s a problem for many people. They get structure from the confines of a job and discipline is imposed upon them by a boss, but it works to keep them from pursuing their God-given purpose and the things they are truly passionate about.

It’s not just issues involving emotional and verbal abuse with which Kari wants to help people; she has a number of other books planned.

“Not only am I a creative person, I am also very entrepreneurial. Many times, those types of people have a hard time fitting into jobs,” she explained. “Many need to create a business around their craft, whatever it is, in order to fully achieve their purpose and be happy.”

Kari has completed a third of her memoir and plans to offer more self-improvement books as well as quirky children’s books.

“Eventually, speaking engagements will be my primary source of income. I have had some excellent speaking experiences and others where I wish the floor would have opened up so I could just drop through,” she admits.  Ironically singing karaoke has helped her to feel fearless on the stage. “I also want to train police officers, firefighters, EMS staff and whomever else might work with people caught in domestic abuse.”

Through all the trials, tribulations and heartbreak she has endured, it forced her to develop strong coping skills. But she wants to help people go far beyond coping with abusive situations. She wants to help break free from that environment and live in freedom.

“You are a person with a unique soul created by God himself for a specific purpose,” she advises others. “You must discover that purpose and move toward it, to feel the deep level of satisfaction you’ve always longed for. I enjoy guiding people on the way along their journey.”

“When God closes doors, it’s for a reason. But, when you step in the right direction, then you will attract everything you need to get to the next point along your journey leading toward your purpose,” she added. “Spiritual warfare is real; it does exist. So, when fear shows up, you know that’s from the enemy. Just walk closer to God and he will guide you along the path he wants you to take.”

To connect with Kari, email her at hello@karilclark.com.