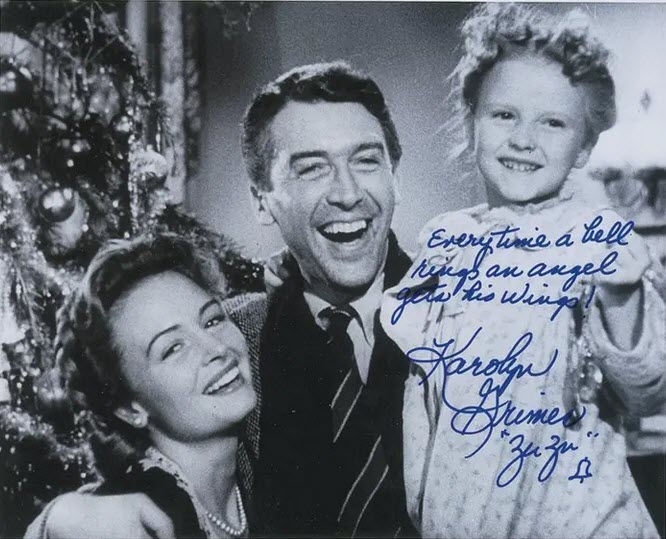 As a child, Karolyn Grimes was best known for Zuzu’s pedals and reciting the memorable closing line in It’s a Wonderful Life, when the 6-year-old star proclaimed, “Every time a bell rings, an angel gets his wings.”

But life wasn’t always a fairy tale for the now 81-year-old who lives in Mount Shasta, Calif.

Her mother developed early-onset Alzheimer’s and died when Karolyn was just 14. Her father died in a car accident the following year, which sent the orphan to live with relatives in rural Missouri. She was married several times, which ended in the deaths of her husbands. Still, she was tasked with raising her seven children, one of whom killed himself when he was 18.

Karolyn did not see It’s a Wonderful Life until the 1970s, nearly 30 years after the original theatrical run flopped at the box office. When she saw it, Karolyn could not stop the tears from flowing, she told Big Issue magazine.

“When I think my life, I think I’d probably be dead by now because I wouldn’t have the belief that I had, and I probably would have gone down the wrong path,” she admitted.

But, like the fictional star of the movie, George Bailey, Karolyn can’t dwell on what her life would have been like if she hadn’t been born. Too many people know of her and have been inspired by her performance and optimism.

“Nobody has a perfect life. But there is this movie that gives you the impetus to choose to look for the positive, to help you find it. It is there,” she explained.

“I’m very fortunate, I am,” Karolyn told Big Issue magazine. “I just have a love for life, and I think that keeps me young.”

The message of It’s a Wonderful Life needs to be told often because life can get in the way to rob people of hope and peace. Yet, when people step back from the pain of their own lives and look at the many ways they have truly impacted the lives of others, it can be eye-opening.

In the movie, Clarence the angel says, “Strange, isn’t it? Each man’s life touches so many other lives. When he isn’t around he leaves an awful hole, doesn’t he?”

If you struggle with thinking you haven’t made a difference in the world, first adopt an attitude of gratitude to see all you have received and all you have done.

Then, make a list of the people who have been impacted for good because of something you said or did.

Finally, look for the common thread of purpose that has been interwoven in everything you’ve done throughout your life.

When you find your purpose and act on it — even when it changes later in life — it opens your eyes to the many ways your life can influence the lives of others.

The full story can be found at Big Issue magazine.